Do we really need to know stuff if we can “just Google it”?

Edit (March 2018): This is an old post now, but the meme below keeps running. A lot has been written about inquiry and technology in the last four years, so I’ll leave some notes in [green].

If you’re an educator on Twitter, you have seen this graphorism doing the rounds, included in this post on Larry Ferlazzo’s blog, which in turn reproduces brain-based education guru Eric Jensen’s Education Week Teacher article Boosting Student Learning. 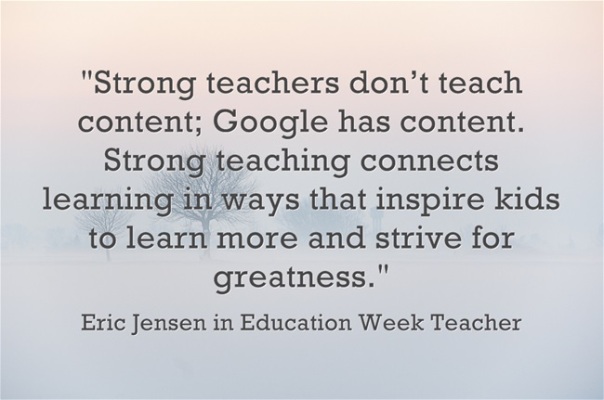 Sweet. We’ve got 1:1 and access to Google and a bunch of hyperlinks. Job done. Well, not quite. Within context I agree with the other four of Jensen’s responses, but this image has been bugging me a bit, being tweeted and retweeted without the full article or argument attached.

Posted on March 19, 2018, in Uncategorized. Bookmark the permalink. Leave a comment.